Adopting VoIP is a great way to future-proof your company 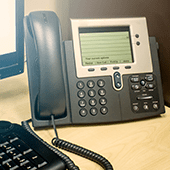 Total immersion into tech is increasingly becoming a requirement in today’s business landscape. But despite this, many companies still use legacy phone systems. It would be smart to move on from outdated communications platforms and embrace a flexible, future-ready solution: VoIP.

Phones have come a long way from analog landlines. Nowadays, many digital phone systems don’t even have conventional telephony hardware anymore. Modern businesses need a phone system that can service all of their needs, and in most cases, VoIP phones are the answer.

VoIP, or Voice over Internet Protocol, is a system of hardware and software that uses the cloud instead of analog circuits to transmit data. VoIP does more than just transmit audio — it can also send a variety of data (videos, documents, etc.) and perform other tasks as well.

A VoIP system’s hardware (phone units, cables, CPUs, etc.) and software (one or more applications that run the system) can be either on-premises or hosted.

On-premises – The hardware and software are physically located within the premises of the company.
Hosted – Some of the hardware, like phone units and other equipment, can be found within the premises. But most, if not all, of the software is hosted online. Service providers look after hosted systems for their clients.

The useful life of hardware remains the same whether it’s on-premises or hosted. Hardware is affected by the wear and tear of daily use. Barring any accidents or physical damage, VoIP hardware should last as long as analog handsets, usually several years.

Software, on the other hand, needs constant updating. It’s faster and cheaper to update software that’s hosted in the cloud versus one that’s on-premises. The differences in longevity between the two should be negligible; both can last upwards of 10 years, depending on your IT support.

Cloud technology has fundamentally changed the way IT solutions are produced. In the past, hardware and software were built to last. Today, they’re built to adapt and change. The effect of this shift on telecommunications technology is dramatic.

Most hardware components are very similar, with replacements and upgrades coming every 5–8 years on average. So even new ones aren’t necessarily cutting-edge, and yet they tend to be costly. Cloud software, on the other hand, is faster, more powerful, and costs less to upgrade. Critical updates can be released almost constantly, with complete overhauls taking no longer than 2–3 years.

As your business grows, your phone system should be able to adapt to rapid growth, the need for more speed, and integration with the other systems in your business, like email or management software.

Be a step ahead

Your business cannot afford dropped or missed calls. Imagine what one day of phone downtime would do to your company. The time to replace your phone system is not after it fails. The best time is before that, when you can plan and budget properly.

Nowadays, it’s not longevity that’s important; it’s staying ahead of the curve. Call our experts today so you can always be a step ahead.